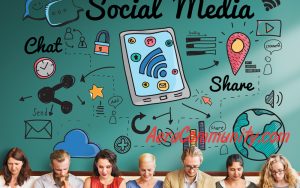 Social media is an extension of internet programing that allows individuals to connect and share information.

Social media is an online platform that allows users to share content such as personal data, documents, videos, and photographs. On a computer, tablet, or smartphone, web-based software or apps can be used to access social media websites. Southeast Asia, in particular Indonesia, has embraced social media in more significant numbers than either the United States or Europe has. 1 By October 2021, 4.5 billion individuals will be on social media.

Getting to Know Social Media

Social media originated as a method to connect with friends and family, but corporations quickly adopted it as a popular new communication tool. In social media, you can talk and share information with everyone on the planet simultaneously. This is the real power of these platforms.

Social media is used by approximately 3.8 billion people worldwide. Every year, new social media apps such as TikTok and Clubhouse join the ranks of established networks such as Facebook, YouTube, Twitter, and Instagram. The US population is predicted to reach 257 million social media users by 2023.

Businesses must use social media. Companies use the platform to identify and engage with customers, promote sales, track consumer trends, and provide customer service.

Social media’s role in helping businesses cannot be emphasized. It improves consumer engagement and allows for social integration on e-commerce platforms. Because it can collect data, it can focus on marketing and market research. It allows for targeted, timely, and unique promotions and coupons to be given to potential customers. Social media can also help build client relationships through social media-linked loyalty programs.

Social media’s real-time interaction has changed the way we connect to each other.

It enables us to learn about what’s going on in the world in real-time, interact with one another, contact long-distance pals, and have instant access to an infinite amount of knowledge. Social media has made the world seem more approachable by allowing people to connect online.

According to a Pew Research Center survey, social media is linked to having more friends and a more diverse personal network, particularly in emerging nations.

Friendships can begin digitally for many youngsters, with 57 percent of teens meeting a friend online.

Businesses use social media marketing to reach customers directly on their phones and computers, build a following, and foster brand culture. Denny’s, for example, has created whole Twitter avatars to sell to younger customers.

While social networking has its advantages, many critics say its overuse is akin to an addiction. Some say it promotes apathy, stress, and envy. Some argue that it causes inattention, anxiety, and jealousy.

According to the National Center for Biotechnology Information, heavy social media use has been linked to depression. 9 Misleading information and falsehoods may also be spread via social media.

The influence of the capacity to propagate false material through the platform on the 2016 American presidential election has been well-documented.

10 This phenomenon uses social media’s strength, allowing anyone to reach millions of people with content that isn’t vetted or fact-checked.

People have used social media to topple governments, report police brutality, reveal criminal activities, and stay in touch with friends and family. Many people use social media to network, get jobs, connect with others globally who share interests, and share their opinions and ideas.

What Are the Six Different Kinds of Social Media?

Social networking, bookmarking, social news, media sharing, microblogging, and online forum sites are the six forms of social media, though they can be broken down in various ways.

What is the most widely used social media platform?

The answer to that should be obvious, at least for now. The response, of course, is Facebook.

How does Social Media Marketing work?

The use of social media to sell a company’s products, such as through Facebook or Instagram ads, using influencers, or otherwise developing a presence online to engage with customers, is known as social media marketing.

With worldwide users exceeding 3.8 billion, it is hard to imagine a corner of the globe void of social media influence. Regardless of how each platform appeals to you, businesses can use various strategies to sell to customers and encourage sales. Social networks are here to stay, helping us stay connected, obtain information fast, and express ourselves online.